Just before entering Cebu City is a young hotel that boasts European hospitality at affordable rates.  Alpa City Suites strategic location and low price rates had earned themselves patrons . But how about their food?
My first Alpa City Suite food experience was great, superb actually but it was because the company’s European Chef was there to facilitate the cooking. I came back to taste Amo’s European Cuisine after being sent a gift certificate from the president/owner of Alpa City Suite which was given through foodie and Sunstar editor Sir Jigs Arquiza. I booked and reserved lunch since I have another set of food tasting event scheduled in the evening. The Amo restaurant’s waiter was very accommodating and seated me to my table setting the utensils with  a big smile on his face. After setting the table he then asked for my order. Since the gift certificate says a set menu can only be ordered, so I settled for the European Cuisine Menu B which is a 5-course meal consisting of soup of the day, Chicken Cordon Blu,  Fish Fillet Foristiere, Brocolli & Cauliflower Casserole and Dessert of the day. (as far as my memory tells me, Set meal B cost is 700php++ for 2 persons). 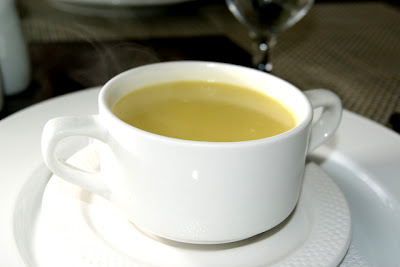 Started the meal with the soup of the day which was Pumpkin Soup. It was creamy and rich, loved it! 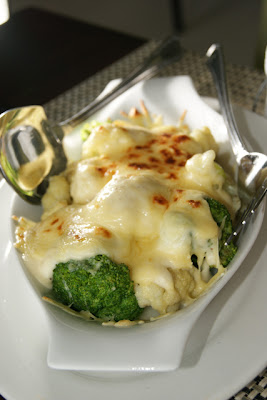 Broccoli and Cauliflower Casserole. Steamed broccoli and cauliflower then topped with cheese then baked ’til the cheese melted and browned. I enjoyed munching on crunchy brocs and caulis! 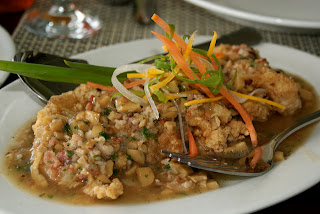 Fish Fillet Foristiere. This was kinda weird for me. Foristiere which means “of the forest” has deep and strong flavors which includes mushrooms. Don’t get me wrong, I love mushrooms but what’s weird about it is that the filleted fish tasted like it was deep fried in a bread coat giving it an oily taste in a brown musky sauce. 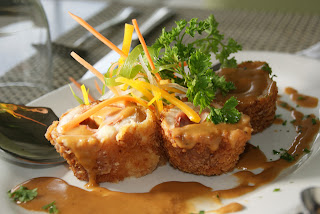 Chicken Cordon Blu/Bleu. Amo’s version was quite hard and dry. Even with the sauce sidings, you can still taste the chicken’s dryness. 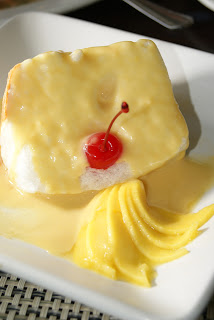 The finale was great! Canonigo is soft and heavenly in custard sauce . This resembles much like Brazo de Mercedes without the middle yolk part.
I wish I could say that I enjoyed the 2nd lunch I had at Alpa City Suites just like my first dining experience at the hotel, but I didn’t, the soup and dessert made me happy though, so it wasn’t all bad. The food was fairly priced though for a hotel resto. 🙂

iLuvCebu gives you a glimpse of the life in the sunny southside, Cebu!

Are you excited to travel again? ❤️ #iLuvCebu

This is your sign! Time to hit the beach! #iluvc

Do your grocery shopping on your smartphone with @

Here’s a teaser of the 125-room all-suite luxury

Yesterday, we celebrated the 500th year of Christi

@cebupacificair passengers can now rebook as many

A bigger and brighter @herschelsupply opens at a n

@owndaysph opens its second branch in the metro at

SkyCable brings kids to a galactic adventure with

The new @caltexph Havoline for even better overall

TastyCebuPH.com: Enjoy Cebu in a Plate!